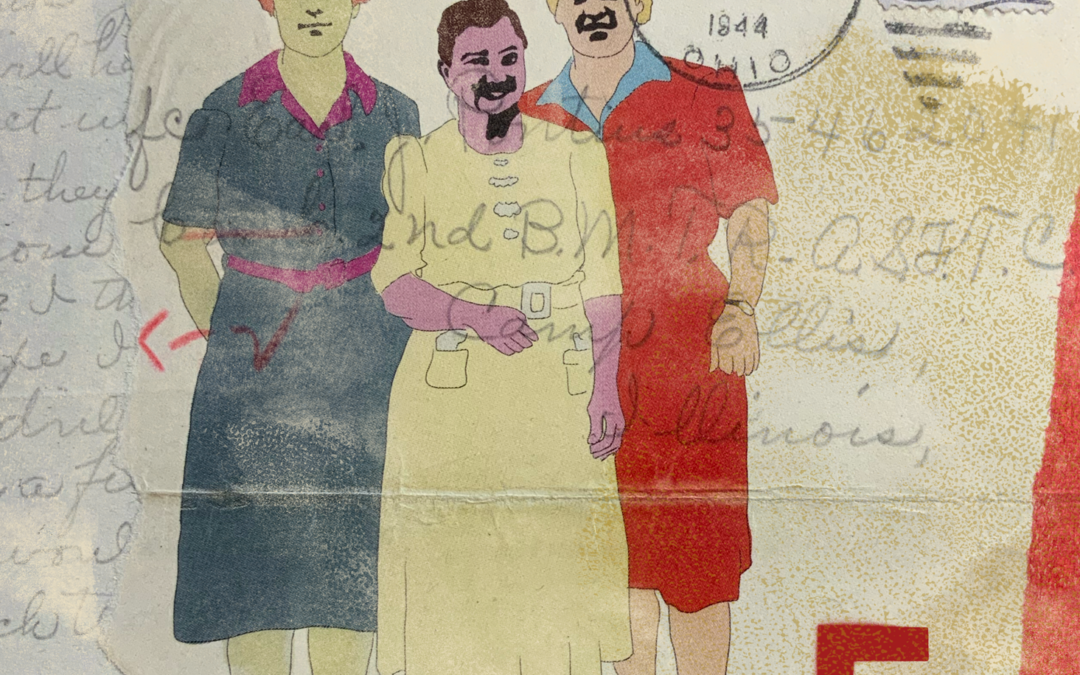 some years ago i used a letter addressed to earl pontius with a series of paintings. now i decided to use another letter as the backdrop for a different set of painting, electronically. the letter contains this message from mother ida pontius to her son in the army.

We got your letter Saturday. According to your letter I think you can not be sure of what will happen next. They surely are very strict with you about leaving there. Have they been sending many men away from there since you have been there? I thought your teeth were in good shape I bet it was fun for them to drill on the one if they put in so large a filling. If they were that bad they would soon have caused you much trouble. We have not had much rain for a while and the ground is getting very dry. The gardens and pastures are needing rain very much. I talked to Lucy this morning she said Herbert was home Saturday to Sunday. His work is in Detroit Micighan [sic] for a while. She wanted us to come down Sunday but Ralph had such a headache when he come home from church so we did not go anywhere. He took a good nap and was then feeling better. Otto called up Saturday night wondered if I would play for Sunday-school. He told me yesterday morning that Ozias Fritz went to Mayo Bros because he was in pretty bad shape he has prostrate gland trouble. So Carrie was not there to play. What do you think I think Dick or Jack could play if they tried? I will help them out if they need me. Well your Pop and Ralph are still down at Getz’s cutting wheat. The binder has been acting up. They have got some kind of a hook + disc, chains, guards for sickle, etc. The binder won’t tie them very good it misses too much. Lucy said when Herbert was in Washington state in the service, that men were sent away with only 24 hours notice. I hope that some way or some how that you won’t have to leave I am glad that you are liking the camp better than you did. I can hardly send you anything like cookies or fruit that is why I sent you the $1. I hope you won’t have to eat bologna sandwiches too often. If you would have to sleep in a tent would you have very good cots or beds to sleep on Edith has not heard from Joseph yet. She still has a woman with her but I have not been up to see them yet. The girls are growing alright they say but Edith would feel so much better if she could hear from Joseph. Did you get your Leader? Jack is supposed to go to college next Saturday is what the paper says. That place is not far from Columbus. I heard on radio last night that all draft boards must put all doctors and dentists under 38 in class A. We had children’s day a the church yesterday. I am sending you a program of yesterday just for fun. I am writing down the names of the children’s fathers just to show you were [sic] some of them belong to. Some they had were very young. If we should have had more rain we would have had a nice bunch of berries but they are just drying up. Well I hope in one of your letters you will or can tell me that you won’t need to leave the states. If you should not get paid you will surely need money you will have to let us know. Well it is about time for Rookstool to come. We send our love + best wishes.

most of the parts of these collages are the letter, envelope and church bulletin that was in ida’s letter.